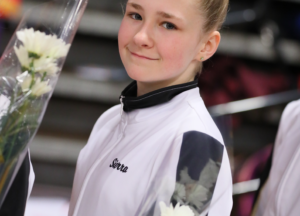 Sierra has been doing gymnastics since she was two years old. She joined Cobra during its opening year in 2010 and the competitive team in 2012. While she is now retired from competing, she thrived in the Xcel program; qualifying for Regionals in both the Silver and Platinum levels.

She attends Rutland High School where she participates in Cross Country, Hockey and Softball. She also enjoys hiking, snowboarding and being outside. Gymnastics has helped her with everything she’s done including other sports and merging friendships. Cobra is one of her favorite places to be and she very excited to be coaching and sharing her passion for the sport with the younger generation.